skip to main | skip to sidebar

Whatever comes to mind, and then the interesting directions that thought will take you on the web.

I'm fascinated by the concept of information. How much data do you need to derive information. How can you inadvertently be providing information?
In Austin Powers, the following interaction takes place:
Austin Powers: Your boss, Number 2. I understand that cat's involved in big underground drills.
Alotta Fagina: How did you know?
Austin Powers: I didn't, baby. You just told me.
Alotta Fagina inadvertenly gives Austin Powers information!
I was watching the TV Show "Designed to Sell". They were featuring a house, but didn't say where it was located, no information.
But in 2 consecutive shots, I got some data:
So, was this enough data to derive the location?
Using Google, I searched for 818 999 sean realtor
This gave me a realtor called Sean, in Woodland Hills with a number starting with 818 999
Next, I searched Google for 21716 "woodland hills"
This gave me a Zillow Page, that had an address 21716 Costanso St, Woodland Hills
This is definitely the house on "Designed to Sell". The image on the left is from the TV, the image on the right is from Google Street View. Interestingly, the Google Street View car was driving through the neighborhood at the time the house was being sold.
From blockshopper we can see that the owners (the people on the TV show) were Adam and Charity Brockman.
And from Zillow, are the new owners, the Cohens and Levins, regretting the $760K purhcase price?
Another example of inadvertently giving out information happened to Netflix, and it landed them in legal trouble. A few years ago, Netflix released ran a contest to create a recommendation engine that was 10% better than their existing one. The contestants used a file that contained millions of ratings that Netflix users had given to movies. The file contained just id numbers to identify people, but researchers were able to correlate the movie ratings with ratings that a person had made on another website (IMDB), identifying the person. Check this out. 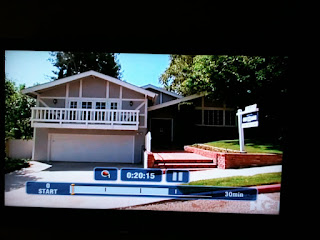 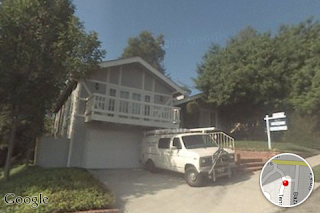 The Greek Debt is approximately 300 Billion Euros
Were Greece to default, Stock Markets are likely to fall, the Euro is likely to fall, Gold is likely to rise.
So, why doesn't Greece, along with their friends at Goldman Sachs, construct a portfolio that will pay off in the event that Greece defaults?
If you know that Greece is going to default, is it possible to surreptitiously construct a position that will pay off 300 Billion Euro? How much would it cost, and how do you stop other European countries bailing Greece out, and screwing up the whole plan?
Let's take an example. How much would the SPX fall if Greece defaulted? Say the SPX declines 7% (1075 to 1000), a position of just 10% of the open interest in the SPX Feb 1100 Puts (12,000 contracts) would give a nice $90 Million Profit. Expand this to more expirations, more strikes, more instruments and this can soon add up to real money. For comparison: after the Russian crisis in 1998, SPX fell approximately 15%.
Posted by Alan at 2:25 PM 1 comment:
Newer Posts Older Posts Home
Subscribe to: Posts (Atom)